Hey there! Hope you're doing well and staying safe. It's been a while since the last update! Since then, A Short Hike has won the Seumas McNally Grand Prize and the Audience Award at the 2020 Independent Games Festival! It still feels surreal to me, but I wanted to thank everyone who played and shared my game. I also want to give credit to Dawn Blair, Mark Sparling, Andrew Wong, and David Czarnowski, since the game wouldn't have been the same without their contributions and support.

So, the update today includes a number of optimizations, bug fixes, and a few commonly requested features. If anyone spots any new bugs in this build, please let me know! 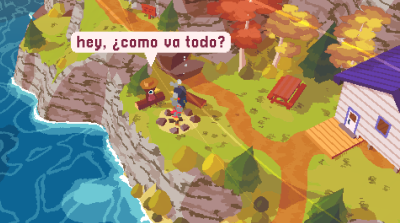 I've added an official French and Spanish translation to the game. It should detect your computer's language settings, but if not, you can change the language from the options menu. I might add more official translations in the future.

There have also been a number of fan translations created for the game. To support the modders, also I've made it much easier to access and modify the game's strings. There's more info on that here.

Autosave and Save Slots 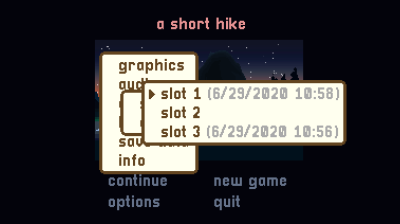 I've added an auto save feature to the game, so if your cat unplugs your computer while your playing, you shouldn't lose any data! There's also a new (although a bit clumsy) interface for switching save slots in the options menu.

For those of you wondering why we're jumping from version 1.4 straight to 1.7 well... It is a mystery! Much like UFOs and ghosts and stuff: no one knows and probably no one ever will!

Get A Short Hike

a little exploration game about hiking up a mountain

Just finished it yesterday, what a lovely little game! It was a delight to play and I loved how well crafted the environment and the characters are. I loved it so much, I'm translating the script in Italian just right now :)
If I had to add something it would be probably a map or quest list (as someone else suggested elsewhere) to check if I have explored everything - maybe to unlock after you finish the game?
I'm going back to play nevertheless, 'cause this game is too precious.

So after almost reaching the end I took a break from the game. Installed the update and was ready to finish the story. Well, the update wiped my save file … I started the game fresh and breezed trough it.

I guess I should be mad about this but the truth is, after a couple angry minutes I didn’t mind, the game is such a relaxing und innocent experience and I just wish there would be even more content - but I guess there is. I have a dozen different fish to catch and at least two treasures yet to find.

Thank you so much for the changes! I can't wait to see them, I'm excited about all of these! Thank you for your incredible work =)

Oh this is so awesome!!! Thank you for listening to the community and continuing to make a short hike even more rad

Yes thanks a lot for the french version. ❤️️

If I ever find a mistake I'll let you know.

Merci pour les francophones! Thank you for the French speakers! :) When a new game?